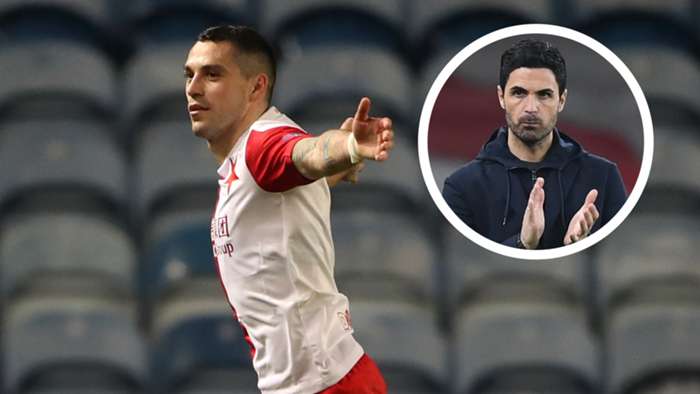 As Arsenal prepare to host Slavia Prague in the first leg of their Europa League quarter-final tie, Mikel Arteta and his players need to pay attention to one player in particular.

At 27 years of age, Nicolae Stanciu arrives at the Emirates in the form of his life.

The Romanian creative midfielder has scored eight times in his last six matches, including a goal in each leg of Slavias 3-1 aggregate win over Steven Gerrards Rangers in the last 16 of the Europa League.

Stanciu was also integral to the elimination of Leicester City in the previous round, creating the opener in his Czech employers decisive 2-0 victory at the Sinobo Stadium.

He has been long since known to British teams, though.

Indeed, Stanciu, who was once regarded in his native country as a modern version of the legendary Gheorghe Hagi, was most recently linked with Marcelo Bielsas Leeds United last summer.

However, Stanciu could have moved to England as far back as 2010, when, as a 17-year-old, he spent two weeks training with Chelsea, having already made his professional debut in the Romanian top flight.

"I was told Im going to Chelsea," Stanciu told reporters before travelling to London. "Its a massive honour for me. I hope I wont disappoint them but Im a bit overwhelmed, to be honest.

"A few days ago nobody knew anything about me and now Im going to one of the biggest clubs in England."

In the end, Stanciu returned home without having secured a transfer, to either Chelsea or Stuttgart. He bounced back fast, though, making an even bigger name for himself at national level, after moves to Vaslui and then FCSB. It was while playing in Bucharest that Chelsea came calling again.

He did eventually secure a transfer, though, with Stanciu joining Anderlecht for €9.8m (£8.4m/$11.7m) just before the close of the summer transfer window in 2016. It was a record fee for both the Romanian and a Belgian leagues.

"We thought Belgium was just a stepping stone in his career," former Romania, West Ham and Tottenham attacker Ilie Dumitrescu told reporters. "He seemed destined to go to a bigger league in no time.

"Stanciu, though, ended up joining Sparta Prague in January 2018 for €4.5m (£3.9m/$5.4m), which was a record fee at the time for the Czech First League. And, a year after, he was on the move again, after accepting an offer to go play for Al Ahli in Saudi Arabia.

However, he left after just six months, tempted back Czech Republic by Spartas arch-rivals, Slavia. He received death threats at the time and also went through a difficult time privately, but he is now finally settled at Slavia.

Jindrich Trpisovsky has been key in that regard. Stanciu has an excellent working relationship with the 45-year-old Slavia coach, who has brought the best out of the enigmatic attacker by getting him fully focused on his football.

"The coach knew how to get under my skin," Stanciu told reporters. "I respect him a lot; we all do. He knows his football well."

Stanciu and Trpisovskys strong bond is certainly reaping rewards for Slavia, as his recent run of goals underlines.

However, there is much more to Stancius game. Slavias little dynamo never stops running. He is constantly on the move, looking for space to create opportunities, or hassling opponents to help out his defence.

He is also something of a dead-ball specialist. Against Rangers, Stanciu scored a sensational long-range free kick, the kind of which Lionel Messi has made his speciality.

Stanciu, though, would never dream of comparing himself to a player he was blown away by when they met in last seasons Champions League.

"Before I played against Messi, I was telling myself: How can he do those dribbles past everyone? Those guys are afraid of him! Well, I played against Neymar, against (Eden) Hazard, Ive seen all of them. But Messi – you just cant take the ball away from him," Stanciu told Romanian website PRO Sport.

"I was a big Cristiano Ronaldo fan before playing against Messi. But my back started hurting before Messi moved a muscle. I havent seen anyone like him. Never!"

Stanciu was benched for Slavias 0-0 draw against Brno in the Czech league at the weekend, with Trpisovsky clearly having one eye on Thursdays Europa League showdown with Arsenal.

Obviously, Arteta and his scouting staff would have already done their homework on their opponents diminutive No.7.