Nubel will develop & learn behind Neuer at Bayern Munich - Kahn 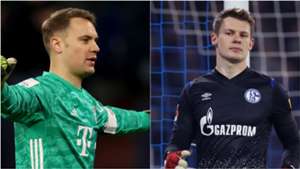 Manuel Neuer will be number one at Bayern Munich next season and will help Alexander Nubel to develop, according to Oliver Kahn.

Neuer's current contract expires in 2021 and there are reports of an impasse in talks over a new deal, leading to suggestions the 34-year-old could be moved on at the end of the season.

Bayern have already signed Nubel on a five-year deal, with the Schalke goalkeeper set to switch to the Allianz Arena on a free transfer ahead of the next campaign.

However, Bayern board member and former keeper Kahn expects Nubel to serve in a backup capacity next term, as he predicts Neuer will continue at the highest level for some time.

"In general, as I have shown myself, goalkeepers can of course play into old age, but maintaining a high level is a great challenge," Kahn, who retired at 38, told Sport Bild.

"In Alexander Nubel, we get a highly talented goalkeeper, who has the chance to develop and learn behind Manuel Neuer. Not many have the opportunity to work with the best goalkeeper in the world every day."

While 2019-20 is on hiatus due to the coronavirus pandemic, Bayern are said to be putting transfer plans in place ahead of next season.

Interim boss Hans Flick said this month that he believes coaches should have the power to veto transfers proposed by club managers, amid suggestions he has been at odds with sporting director Hasan Salihamidzic over Bayern's planning.

Kahn has also weighed on the issue, admitting it is important that Bayern "march in one direction in order to develop the team further".

He added: "Of course, the coach is a very important factor in terms of transfer plans. Hasan Salihamidzic, Hansi Flick and I discussed and coordinated this and other topics intensively.

"The coach can and should put forward his ideas."

Bayern are on course to win the Bundesliga for an eighth successive season after establishing a four-point lead at the top of the table after 25 fixtures.

A tentative date of April 30 has been set for the campaign to restart, but it is not yet known for certain whether the safety of players and staff can be guaranteed amid the covid-19 crisis which has caused major disruptions to the sporting calendar across the globe.