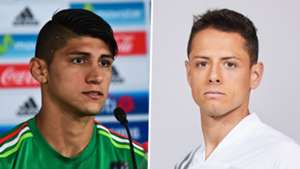 New LA Galaxy forward Javier "Chicharito" Hernandez courted controversy when he called himself a legend of Mexican soccer in his introductory news conference, but for Hernandez's countryman Alan Pulido, there's no doubt Hernandez fits the bill.

The new Sporting Kansas City forward said Tuesday that Chicharito wouldn't have the same sort of harsh judgments passed on him were he to be a foreign player.

"In Mexico you can't praise yourself. That's how the Mexican culture is," Pulido told Goal . "When a foreign player does it, we all applaud him. We say, 'What a great mentality this player has.'

"Of course he's left a footprint, which very few players have done."

Hernandez spent the last decade of his career in Europe, playing with Manchester United, Real Madrid, Bayer Leverkusen and West Ham before moving to Sevilla in the summer. With minutes hard to come by and Hernandez long a dream target for MLS clubs, the 31-year-old finally is making the jump back across the Atlantic.

In one of his first interviews as a Galaxy player, Hernandez said that Liga MX and Mexican fans "don't want to notice" the successes of MLS , while Pulido recently added that Mexican fans get "upset" when a player chooses to play somewhere else.

Pulido says the impressive career Hernandez had in Europe serves as inspiration in Guadalajara, where Pulido spent the last four years of his career with Chivas, and throughout the country.

"The majority of young players want to be like Chicharito. It's not bad that he says that, that he recognize it. He's not lying. It's a reality," said Pulido, who currently is in preseason with Peter Vermes' men in Arizona. "He serves as motivation for every one of us. He's an emblem of Mexicans soccer. It makes me happy to know there are players with great talent who are able to succeed in other countries."

Pulido, the top scorer in the 2019 Apertura, also played in Greece and said he has seen players of other nationalities come together and build each other up, rather than do something like criticizing a statement like Hernandez's 'legend' comment.

"Other types of players support each other amongst themselves. They've got another culture that's very different from the Mexican players," Pulido said. "When it comes to speaking about a Mexican player, the criticisms rain down. They call you lucky. It happens in other jobs, in other situations in Mexico. They never give credit to the person who has put in the effort, they never applaud that," he said.

"Something extra has to happen so you might be able to come out on top. They said Chicharito was a 'tronco,' that he didn't score goals. Then he was scoring goals, and they said it was lucky. You realize how the Mexican culture is. It has made me sad on a number of occasions.

"The fans don't want to see success stories, even less if they're Mexican. There, they praise the foreign player more when he's top scorer. They celebrate it more and start to say he's 'a crack'. That's how the culture is. It's the reality."

The two forwards will share the field April 4 at Dignity Health Sports Park, a month after SKC's Feb. 29 opener against the Vancouver Whitecaps.