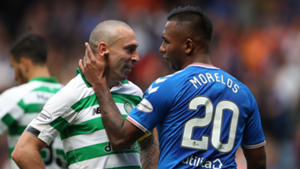 Rangers will be desperate for victory when they welcome Celtic to Ibrox for Sunday's Old Firm derby.

Steven Gerrard's men are 13 points adrift of their rivals, having won just four of their last nine Premiership matches.

However, they did run out 2-1 away winners in the last derby match, and can be backed at 15/8 (2.88) to record back-to-back victories over their neighbours for the first time since 2009.

The Hoops have collected 28 points from a possible 30 since that 2-1 defeat, and are 7/5 (2.40) favourites to regain bragging rights by coming out on top here.

None of the last 10 meetings between this pair have resulted in draws, but you can get odds of 23/10 (3.30) on them cancelling each other out in this one.

Ryan Jack and Jermain Defoe will both face late fitness tests, while Filip Helander is definitely ruled out.

Mikey Johnston is the only absentee for the guests, as he continues his recovery from knee ligament damage.

While Gerrard's tenure has had its ups and downs, he has certainly made the team more competitive in derby encounters.

After going 14 games without beating Celtic in normal time prior to his arrival - losing the final two by a combined scoreline of 9-1 - the Gers have won three out of seven since he took over and lost just once by more than a single goal.

Having conceded just three times in 11 league home matches, they will back themselves to at least keep things tight and competitive on Sunday.

Rangers vs Celtic Tips and Predictions

All in all, odds of 4/5 (1.80) look like solid value on Rangers ensuring under 2.5 goals for their sixth match in eight versus Neil Lennon's team.

All odds correct at time of publish. Please gamble responsibly.