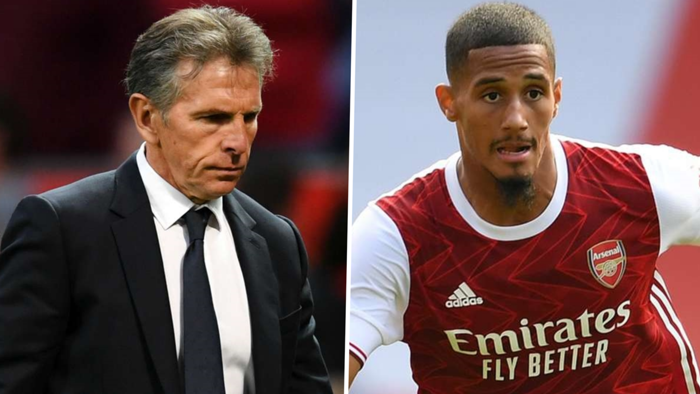 Saint-Etienne head coachClaude Puel has slammed Arsenal for their treatment ofWilliam Saliba after the defender was left off the team's Europa League squad.

Upon his return to Arsenal ahead of this season Saliba's prospects for playing time were in doubt, and the Gunners attempted to find a loan solution for the 19-year-old.

Another loan back to Saint-Etienne was proposed but the move fell through at the last minute, much to the Ligue 1 side's frustration.

The Gunners were also in talks with Championship clubs, including Brentford, over a loan for Saliba, but that potential move also fell through.

That has left Saliba, whois still waiting for his Gunners debut, in limbo as he faces an uncertain future with the north London club.

Puel has been left upset at Arsenal's treatment of Saliba, fearing that the club's short-term strategy may do real damage to the teenager's long-term development.

"It was short-term thinking, even for a young player," Puel told L'Equipe."A superb player like William, to whom I wish the best, has not even made it to Arsenal’sEuropa Leaguesquad. Where is the logic, if not financial?

"He had a great desire to join us. The club are a bit like family and friends to him. His adaptation would have been instant.

"This would have happened if all the conditions had met. It had to remain consistent with our finances and his contract, particularly for the management."

Earlier this month, Arsenal manager Mikel Arteta explained that injuries and a coronavirus-shortened season meant Saliba's 2019-20 campaign wasn't what he or the Gunners had hoped.

“He had a year last year where Arsenal loaned him to Saint-Etienne and that was a transition year for him," Arteta said.

“For many reasons, that wasn't the transition year that he needed because he had a lot of injuries, some personal issues and also with Covid and the French league getting cancelled, he didn't have that year.