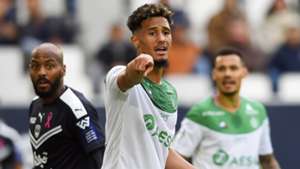 Arsenal need William Saliba to be "horrible" when he officially completes a switch from St Etienne this summer, says Kevin Campbell, with the Gunners looking to add bite to their backline.

Plenty of ball-playing options have been added to the ranks at Emirates Stadium, but Mikel Arteta is considered to require defenders who can blend graft with guile.

Pablo Mari was acquired in January to help try and tick that box, while exciting teenager Saliba is on his way to north London.

Arsenal tied up a deal for the 18-year-old in 2019, but agreed to let him spend another season in his native France.

They are now counting down the days until his arrival, while speculation suggests that Arteta also holds interest in the likes of John Stones and Dayot Upamecano.

Campbell hopes the right pieces for the puzzle can be found at Arsenal, with an intriguing blend of youth and experience being cobbled together.

The former Gunners striker told AFTV: "He [Arteta] already knows what he's going to get from [Mesut] Ozil, from [Alexandre] Lacazette, from Sokratis [Papastathopoulos], from David Luiz and all the experienced guys because he's coached against them at Man City.

"He knows what they are, he knows they're not stupid. But what's he going to get from these talented youngsters, do they have the right attitude for Arsenal?

"If they don't, they've got to go. It's so important he gets ruthless with everyone, because we could be waiting on a [Ainsley] Maitland-Niles to cross that gap and it never happens.

"You'll always feel a bit sorry, say he never got the chance, but it's nonsense now, it's his fourth manager and the jury's still out so something's got to give.

"He knows what he's going to get from the [Shkodran] Mustafis of this world. He's got to recruit new. Saliba's coming in, fantastic, we want Saliba in there.

"We want someone horrible at the back, probably another centre-half in there. Rob Holding, we've not heard about him, he's another one that will be tested.

"Arteta has come from a place at City where you know what you're going to get, these guys are trusted, they've got that consistency to perform.

"We had it, but we haven't got it anymore, and it's going to have to be a ruthless streak, that's why I say rip it up and start again.

"Arteta, for me, is going to start doing that now because he hasn't got time to be messing about."

Arsenal have started to piece together recruitment plans for the summer and have time at present to mull over their options as English and European football takes a break amid the global coronavirus pandemic.