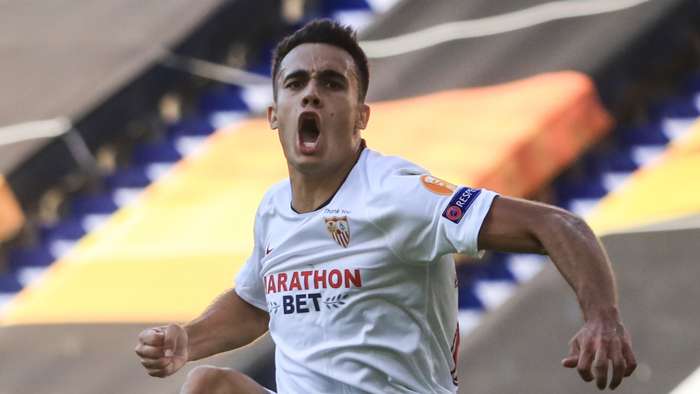 Reguilon has only just returned to Real Madrid after an impressive loan spell atRamon Sanchez-Pizjuan Stadium in 2019-20.

The 23-year-old took in 36 appearances for Sevilla across all competitions, scoring three goals and providing four assists to help Julen Lopetegui's side finish fourth in La Liga and win the Europa League.

Despite proving himself on both domestic and European stages in Andalucia, it has been reported that he will not figure inZinedine Zidane's plans in Madrid when the new season kicks off later this month.

The Spain international opened the door to a possible move away from Madrid prior to the international break, telling Radio Marca: "I'm going day by day.

"Obviously, Real Madrid is my home, but it's not easy... I'm bearing everything in mind."

Several high-profile potential suitors have been credited with an interest in Reguilon in recent weeks, including Premier League duo United and Tottenham, while Sevilla have been tipped to try and bring him backto the club.

Monchi says that, although the talented left-back would be welcomed back into Lopetegui's squad with open arms, Sevilla are not in a strong enough financial position to broker a permanent transfer at this moment in time.

The 51-year-old said: “Regarding the issue of Reguilon, I already said it, we would love to have him here but it is complicated because there are very strong rivals with whom we are not in a position to fight financially.

“We are in a health and economic crisis, so we are going to put it down when it comes to talking about quantities, luckily it has caught us in a good circumstance, but the crisis also affects Sevilla FC.

"We are making the investments that we believe are appropriate to strengthen the squad.”

Sevilla have also been heavily linked with Alonso, whose place in Chelsea's starting XI is likely to come under serious threat following Ben Chilwell's arrival from Leicester.