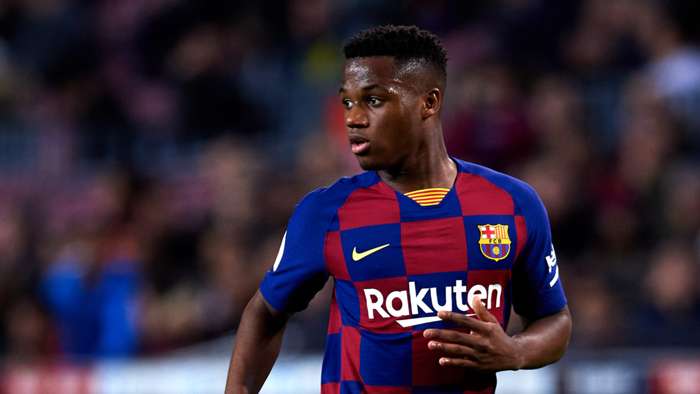 Barcelona are set to start negotiations with teenage sensation Ansu Fati over a new long-term contract at the club, Goal can confirm.

The 17-year-old wonderkid again hit the headlines in the past week, first becoming Spain's youngest debutant since 1936in the match against Germany, before scoring on his first-ever start versusUkraine to become the nation's youngest-ever goalscorer.

Talks about a new contract for Fati would have likely already begun if it wasn't for the saga surrounding Lionel Messi's future, with the Guinea-Bissau-born attacker's current deal set to expire in June 2022.

Sources within Fati's camp have told Goalthe player is keen to stay at Barcelona, but he wants assurances about his progression to regular first-team football.

He is enjoying his recent achievements and wants to ensure that he is able to capitalise on these moments to keep his career moving forward.

Fati's contract negotiations will be handled by super agent Jorge Mendes, who has been booked in for meetings by Barcelona over the next few days.

Fati has earned comparisons with Messifollowing his meteoric rise over the last 12 months from La Masia talent to potential superstar.

Shortly after his 17th birthday, Fati became the youngest scorer in Champions League history with his winner against Inter in a 2-1 victory in December.

His debut season with the senior Barca teamhas seen the talented attacker score eight goals and create one assist in 33 appearances across all competitions.

However, 18 of these appearances were as a substitute, as the teenager was gradually introduced to the first-team fold.

"I will continue working and the coach is the one who decides," Fati said when asked if he can play more at Barca this season following Ronald Koeman's appointment as coach to replace the sacked Quique Setien.