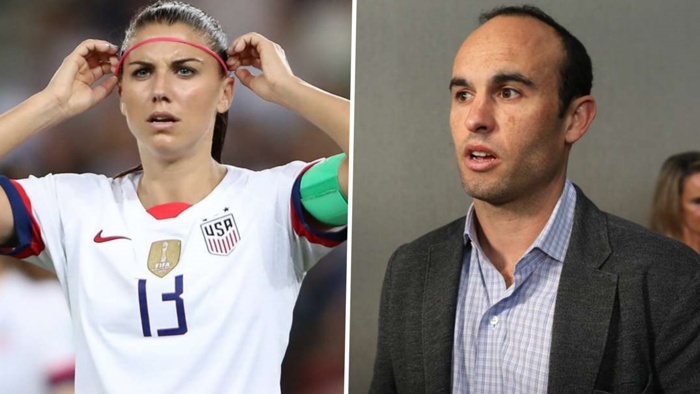 Though they were leading 3-1 in the match, the Loyal forfeited the game by decidingto leave the field.

USMNT legend Donovan said the forfeit was well worth it aftera racial slur was allegedly directed at one of the Loyal's players in their previous match.

“Our guys, to their immense credit, said we were not going to stand for this," Donovan said after the Loyal had walked off the pitch."They were very clear in that moment that they were giving up all hopes of making the playoffs, even though they were beating one of the best teams in the league."

Morgan has stood behind Donovan's decision, saying that she believes the former LA Galaxy star did the right thing.

"I have always respected Landon Donovan, as a player, as a person and the fact that he has grown that club San Diego Loyal over the past year too," the USWNT striker said.

"It’s really been great to see. But also that he’s travelling with the squad and is so outspoken about the team’s beliefs was important especially when it came to the homophobic slur that was said on the pitch, I just respect them so much for deciding to not play the remainder of the game. I think that’s the right decision.

"And just looking up the video from Landon, speaking with the opposing coach, you see that there is still so much progress we have to make both in and out of the sports culture.

"But the things we see and hear today just have no place in football and it was great to see them step off the pitch because they knew that there really wasn’t a place for it.

"My heart goes out to the player that was the victim of the homophobic slur and I hope he feels like he belongs in football and it’s great to see them back him up."

Morgan joined Tottenham from the Orlando Pride in NWSL ahead of the Women's Super League season, and could be set to debut this weekend against Manchester City.