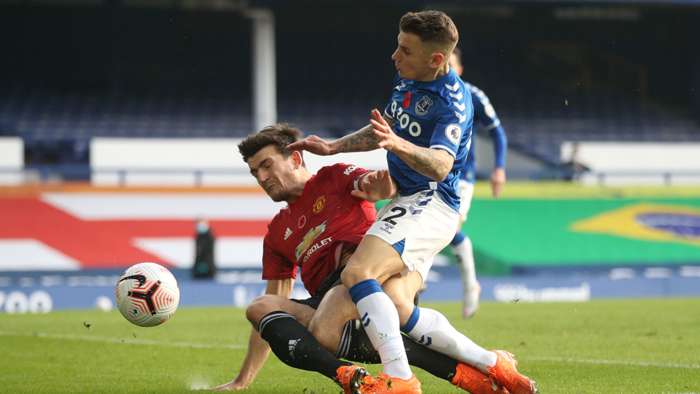 Bruno Fernandes was, however, to turn the tie on its head before half-time.

The Portuguese playmaker bagged a brace on Merseyside, further underlining his value to the collective cause at Old Trafford.

The goals dried up somewhat after the interval, but there was no shortage of talking points.

Technology remains a source of lively debate in English football, and the latest round of fixtures has delivered more talking points.

Two of those arrived in the second-half at Goodison, with a couple of big penalty shouts falling on deaf ears.

The first saw Everton goalkeeper Pickford fall back under the spotlight.

During a Merseyside derby date in October, the England international clattered into Virgil van Dijk.

The Liverpool defender was left nursing knee ligament damage, but the Toffees shot-stopper faced no action at the time or retrospectively.

He got away with another reckless challenge against United.

The ball squirmed out of his grasp when trying to collect a high, floated cross into the box, with his handling letting him down once again.

As he tried to make amends for his error, which had come under pressure, Pickford raised a boot into the midriff of Maguire.

The ball ended up looping onto the top of the net and play continued, with VAR taking no further action.

Those at Stockley Park were called into action again shortly afterwards as Maguire slid into a tackle on Lucas Digne.

The Red Devils skipper got a toe to the ball, but also got plenty of his man.

Digne was sent up in the air and left crumpled on the turf, but again the match officials were unmoved.

All contentious incidents are now checked, especially those which could result in a spot-kick, but VAR determined that no foul had been committed.