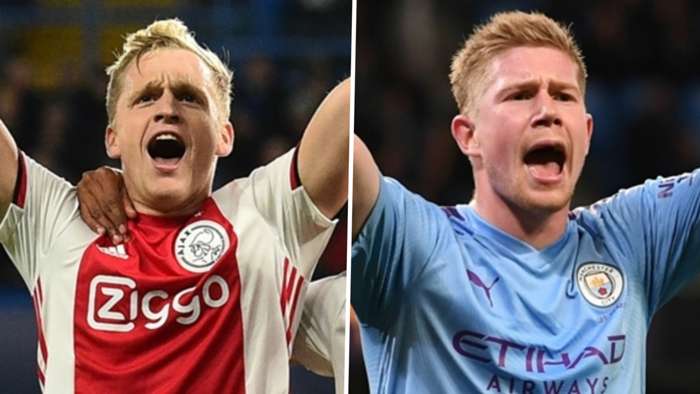 Donny van de Beek’s arrival at Manchester United has Rio Ferdinand excited, with the Dutchman having posted numbers at Ajax that place him into a talent bracket alongside Kevin De Bruyne.

Ole Gunnar Solskjaer has snapped up the highly-rated Netherlands international in a £35 million ($46m) deal.

The plan is that another creative influence will slot in alongside the likes of Bruno Fernandes and Paul Pogba and allow the Red Devils to become even more of a force going forward.

There is every reason to believe that Van de Beek will prove to be a shrewd addition, with his goal and assist figures at Ajax making for impressive reading.

Ferdinand believes those qualities will be showcased in English football, with United having acquired themselves a playmaker of a standard similar to that of one shining at arch-rivals Manchester City.

“What does he bring to the team, to this squad?”former United defender Ferdinand mused on his YouTube channel.

“He brings goals, he brings assists, he runs into the box, he has a good work ethic and an unbelievable brain. As an Ajax guy, he knows how to play good football.

“Edwin van der Sar, my old mate – did you see it, by the way, on social media? He put crying faces when I said Van de Beek on his way into Man United – he wasn’t happy.

Ferdinand added: “Imagine Van de Beek alongside the likes of Bruno Fernandes, being fed. I’ve got a little stat for you here. I’ve been doing a bit of research, because that’s what I do.

“In the last three seasons, if you put him up against any of the midfielders in the Premier League, in terms of goal involvements, where do you think he ranks?

“At a guess I said seventh or eighth. He’s second, only to Kevin de Bruyne.

“That’s unbelievable, to be fair, and De Bruyne’s one of the best in the world. So he’s sitting in good company.”

Van de Beek recorded 41 goals and 34 assists through his 175 appearances for Ajax and Ferdinand hopes the 23-year-old will be given time in which to replicate those efforts with United.

The ex-England international said: “Will it happen immediately? Time will tell. What you do know is United are getting a good player. A solid, all-round player, who understands the game.

“And by the way, when I watched him the year before last on that great Champions League run Ajax had, the intelligence, getting in between the lines, running late into the box, and when getting in there –BANG! – his finishing was cold.