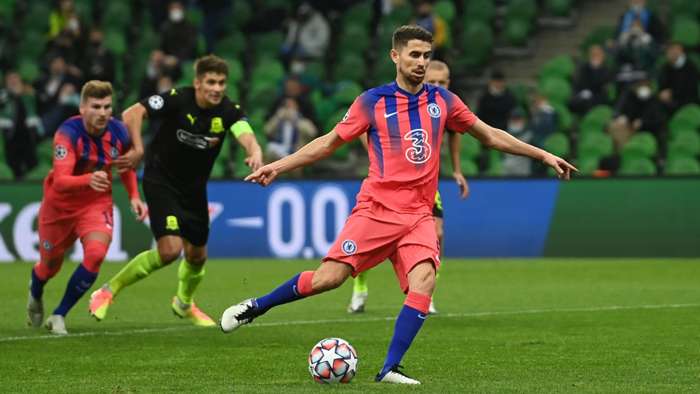 Frank Lampard says that there will be discussions to determine who Chelsea's penalty taker will be going forward after Jorinho missed from the spot on Wednesday.

However, the Italian has missed two of the four spot-kicks he's taken this term, misfiring against Liverpool in the league before seeing a shot hit the post and bounce out in Wednesday's 4-0 Champions League win over Krasnador.

Chelsea earned a second penalty in the second half, with Timo Werner rocketing his spot-kick into the back of the net for Chelsea's second goal of the day.

After the match, Lampard insisted that he still has faith in Jorginho going forward but, given the amount of attacking players in the squad, the Chelsea boss says he understands there are other options for the role.

"Jorginho has had an incredibly successful rate of scoring penalties in his career, particularly at Chelsea," Lampard said.

"My feeling is that when you take as many penalties as he does there can be periods when you can miss one or two. I've experienced that as a player.

"I've no problem at all with his style of taking them because of the success he has had and Timo Werner I know is very capable of taking penalties, as we saw.

"We have other players that can do it so I'll talk with them afterwards to see how we move forward, but we have good takers at the club."

Chelsea's attacking unit shone on Tuesday, with Werner, Hakim Ziyech, Christian Pulisic and Callum Hudson-Odoi all getting on the scoresheet.

With the likes of Kai Havertz, Mason Mount and Tammy Abraham also involved in the battle for spots in Lampard's attack, the Chelsea manager said he was pleased to see several different players shine on Wednesday.

"Hakim Ziyech was fit today, the first time he's really been fit to start a game," he said.

"He has worked really hard to be fit and I was very keen to get his quality into the team. We saw that for the whole period he was on the pitch. He brought a lot of quality and calmness and got a well-deserved goal.

"With Callum on the left, I felt he deserved a chance to play. He's trained very well recently, we have competition in those areas and we're also in the middle of a very busy patch of games so we need input from all the attacking players.