Why Aguero and Firmino should fear Jesus
Match

Why Aguero and Firmino should fear Jesus 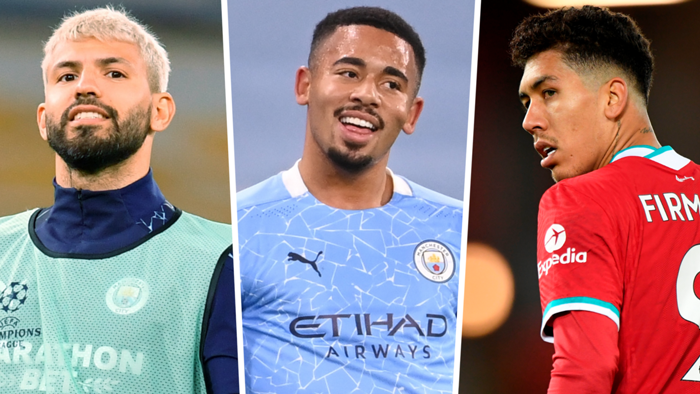 Brazil strikers Gabriel Jesus and Roberto Firmino were all smiles during training at Granja Comary Football Complex in the mountainous region ofRegiao Serrana this week.

Ahead of qualifiers against Venezuela and Uruguay in Montevideo over the next four days, the Selecao have already made a strong start to extending their proud run of playing in every World Cup, by beating Bolivia and Peru last month.

But less than a week ago, the two Premier League forwards were in contrasting moods following the 1-1 draw between title rivals Manchester City and Liverpool.

While the point better suited the current champions, Firmino would have left the Etihad far less satisfied with his afternoon's work than Jesus.

Firmino was substituted inside an hour, after failing to make an impact in an attacking quartet that included Mohamed Salah, Sadio Mane and Diogo Jota. With just three goals in his last 31 appearances and only one this season, his regular place in Jurgen Klopp’s starting line-up is now under threat.

Jesus, though, would have been enthused with his contribution to a game between the two strongest sides in England.

He salvaged a point for City with a superb moment of individual skill reminiscent of Brazil legend Romario. His quick feet and turn bamboozled Trent Alexander-Arnold and he had the strength to hold off Joel Matip before poking the ball past international team-mate Alisson for his third goal in just three appearances this season.

The 23-year-old is finally mounting a serious bid to become City’s regular No.9 ahead of club legend Sergio Aguero.

With eight goals in his last 11 appearances, and Aguero’s injury problems reducing his game time to just 178 minutes in the last four months, Jesus has belatedly begun stepping out of the Argentine's shadow.

Pep Guardiola and his coaching staff have never had any doubts about Jesus' talent, believing him capable of becoming one of the best strikers in Europe, which is why interest from big clubs, including Juventus and Inter, has always been rebuffed.

There have been times throughout his three-and-a-half years at the Etihad Stadium when he has looked primed to play a leading role only for injuries or goal droughts to get in the way.

While he will struggle to match the strike-rate of City's record goalscorer Aguero, Jesus does offer different qualities that Guardiola appreciates. His hard running, energy, commitment and flexibility are admired by the City boss and explain why he is selected for certain matches.

Jesus even started as a left winger in a fluid forward line for last season's impressive Champions League win over Real Madrid atSantiago Bernabeu, where he scored the crucial equaliser in a 2-1 win.

He also led the line in the 2-1 quarter-final loss to Lyon, spurning one good opportunity but carving out an even better one in the dying minutes that Raheem Sterling somehow smashed over the bar.

Jesus left the pitch in tears and one of the criticisms that he has faced is that he can be too emotional. Pressure builds within the striker when he goes on long runs without goals and he snatches at good opportunities that he finishes comfortably when he’s on a hot streak.

"What’s important is what he does when he misses. He doesn't hide– he tries again,” Guardiola said earlier this year.

“But he has to live with pressure as he is a striker and has to score goals. This is normal at big clubs all around the world."

Jesus was still a teenager when he left Palmeiras in Sao Paulo for the wet and cold of Manchester in January 2017. His family would make regular visits to England, as would boyhood friends, but there were times when he felt isolated.

Fellow Brazilians Fernandinho, Danilo and Ederson tried to help him to feel at home but it was still a difficult period for a young man close to his mother who was 6,000 miles from home.

However, there are signs that he is becoming more comfortable in his surroundings.

It was a notable sign of his maturity that he took on the responsibility of post-match interviews after his comeback games against Olympiacos and Liverpool.

Jesus is pointedly respectful of his team-mates, particularly Aguero, knowing they are in a battle for the same position, but his stature is starting to grow.

"We played at home, we have to win these games we play so the result is not good for us,” he said after the 1-1 draw with Liverpool. “Maybe it is good for them but we have to keep fighting until the end.”

Jesus is still to convince some doubters that he has what it takes to be one of the best strikers in the world, including Brazil coach Tite, who is likely to play him as a left winger for their World Cup qualifiers with Firmino as the centre-forward.

And he will face another fight for the main striking spot when he returns to the Etihad, with the fit-again Aguero hoping to be involved in the first game back against Tottenham.