Why does Messi wear No.10 shirt at Barcelona?

Why does Messi wear No.10 shirt at Barcelona? 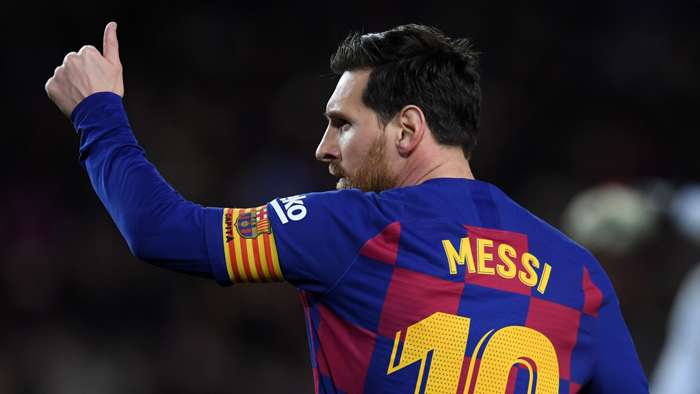 Lionel Messi has been Barcelona's talisman for more than a decade, the star striker synonymous with the colours of Blaugrana.

The Argentina forward will forever be known as the club's iconic No.10, but why does he wear that number, and will the club ever retire it in his honour? Goal takes a look.

Messi began his first-team career at Barcelona and scored his first senior goal for the clubwearing the No.30, before switching to No.19 after establishing himself as a regular in the side.

He inherited the No.10 shirt fromformer team-mate Ronaldinho, who left the club at the end of the 2007-08 season.

The No.10 shirt holds a huge amount of weight in and of itself, usually reserved for the centralplaymakersof the team.

Messi has spoken about the influence Ronaldinho has had on his career, especially with guiding him on transitioning into the senior side.

“He Ronaldinho was a great help,” Messi told the Barcelona official website in 2013. “It’s never easy to go into a changing room at the age of 16, especially with my character.

"Before leaving the club Ronaldinho was coming off a few months where he was thinking about things.

"He had it in his mind that he was leaving and he told me to have his number. I took it without looking at what he had done with the shirt. If I did, I would not have taken it."

Indeed, it was Ronaldinho who assisted Messi's first-ever goal in La Liga, with the two having great admiration for each other to this day.

It might be the natural course of order for Barcelona to eventually retire the No.10 shirt in honour of Messi. After all, the No.10 shirt wouldbe an enormous weight to carry for Messi's eventual successor at the club, with the Argentina striker's boots impossible to truly fill.

But should the Catalan side even wish to retire the No.10 shirt, they would not be able to.

Spanish football rules state that each team is only allowed to name 25 players in any given squad, and the team must delegate shirt numbers between 1 and 25.

Retiring the No.10 would leave the side one player short.

Despite the rules,Ronaldinho has insistedthat his former side should not allow another player to wear the number when Messi leaves the club.

"When Messi retires, which I hope will be a long time from now, they should leave the No.10there so that nobody can touch it again," he told the Sun in 2018.

There have been some exceptions madethat have allowed teams to at least temporarily retire shirt numbers.

Sevilla were not allowed to retire the No.16 shirt for former player Antonio Puerta, who had suffered a cardiac arrest on the pitch in 2007. He passed awaythree days later.

The Spanish side then decided to only allow youth players to wear the No.16 jersey. Jesus Navas, Puerta's former team-mate at academy level and close friend, was given the shirt when he returned to the club in 2017.

Barcelona were only allowed to retire Luis Enrique's No.21 shirtfor just two years (2004–06) due to the regulations. The No.21 shirt was awarded toLilian Thuramin 2006.