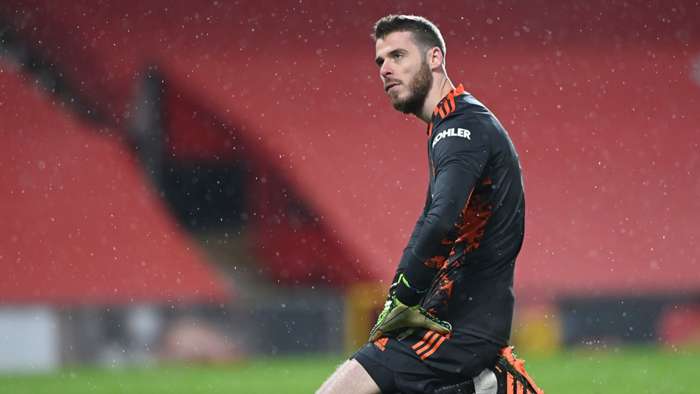 David de Gea is lacking "courage" between the sticks and Manchester United don't believe they can challenge Manchester City for the Premier League crown, according to Roy Keane.

Ole Gunnar Solskjaer's side took a two-goal lead into the break thanks to efforts from Edinson Cavani and Bruno Fernandes, but the Toffees hauled themselves level with two quick-fire goals fromAbdoulaye Doucoure and James Rodriguez after the restart.

A Scott McTominay header put the hosts back in front in the 70th minute, however, it was Everton who had the final say on proceedings, with Dominic Calvert-Lewin stabbing home from close range in stoppage time.

De Gea was at fault for both Doucoure and James' goals, as he tamely parried a Calvert-Lewin cross back into danger for the former and failed to challenge the England international as he raced through for the latter.

Solskjaer ruled United out of the title race in his post-match interview, and Keane offered his damning assessment of both De Gea and the team as a wholethe following day.

"I’m surprised really, we weren’t thinking this over the last 12 months that United could challenge Manchester City, but I think they’ll be the best of the rest," the United legend toldSky Sports.

"Listening to Ole and the last few performances and the goalkeeper last night… they probably don’t have the belief they can challenge Man City.

"And if you don’t have the belief you can do it, then there’s a good chance you won’t do it. But they’re capable of scoring lots of goals.

"Obviously when Ole came out with it last night that he didn’t feel they are ready to win the league. I just think if you’re playing for Man United and you’re up near the top you’ve got to believe you can win the league title.

"Or what’s the point of being at Man United? You might as well go to a mid-table team, you’re at Man United to win titles, it’s as simple as that. I don’t tolerate this idea.

"Particularly with the position they are in, they’ve got goals in their team but again defensively, particularly the goalkeeper, I’m certainly not his biggest fan, two goals last night, the one thing you want from your goalkeeper is courage and he didn’t show that for the equalising goal. Not a good sign."

Solskjaer stuck with De Gea as his No.1 shot-stopper at the start of the season, despite calling Dean Henderson back to Old Trafford from his two-year loan spell at Sheffield United.

Unfortunately, the Norwegian has not been rewarded for his faith in the Spaniard, who has cost the Red Devils valuable points on a consistent basis once again.

De Gea is no longer the reliable presence in the net he once was, and Henderson will likely step in for him when United take on West Ham in the FA Cup on Tuesday night.

Pressure could rise on Solskjaer to stick with the Englishman if he performs against the Hammers, with a Premier League clash against West Brom set to follow on February 14.