'Liverpool played like a bunch of strangers' - Klopp needs to have a 're-think' after Brighton defeat, says Lawrenson
Match

'Liverpool played like a bunch of strangers' - Klopp needs to have a 're-think' after Brighton defeat, says Lawrenson 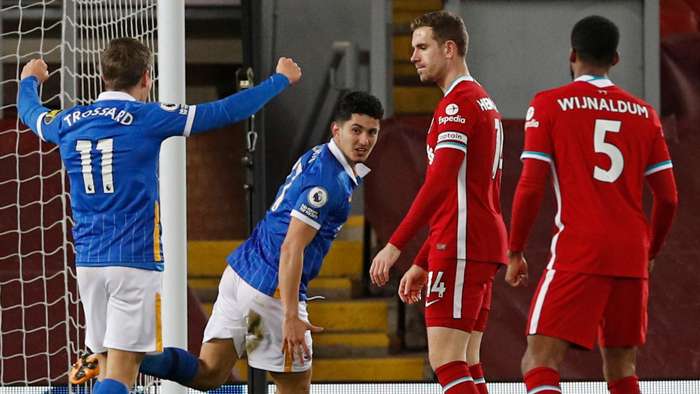 Liverpool played "like a bunch of strangers" against Brighton, according to Mark Lawrenson, who says Jurgen Klopp needs to have a re-thinkafter an"unusual" defeat.

The Seagulls were good value for their 1-0 victory against a Liverpool side lacking a cutting edge, as the likes of Mohamed Salah and Roberto Firmino struggled tomake an impact on the game in the final third.

Klopp's sideseemed to have turned a corner after a five-match winless run by beating Tottenham and West Ham last week, but their latest resultat Anfield was an untimely setback ahead of a top-of-the-table clash against Manchester City on Sunday.

Lawrenson was shocked by the Reds' latest performance, and has suggested that Klopp may have to go back to the drawing board to get their season back on track.

The Liverpool legend told talkSPORT: “The last time Brighton won at Anfield I was actually playing for Liverpool against them! I thought the last couple of results for Liverpool, winning at Tottenham where they played well and beating West Ham, it makes you think ‘they’re back’.

“It looked like they had that swagger back, they looked more confident. But last night was just really really strange. They played like a bunch of strangers in all honesty, they hardly created too much which is most unusual to them.

“Last night’s result was a big surprise. We knew Brighton would make it difficult because they’re in a good run, but it was a very strange result.

“You look back at the quality of the goals they scored against West Ham in the second half, they were really quality team goals, and then that performance last night – that will drive Klopp mad.

“That result is the worst one for him. You understood how they lost to Burnley because they were on a bit of a bad run, but to win two difficult games on the road against Tottenham and West Ham and then lose at home to Brighton?

“It’s like, wow. It’s almost time to return to base and start again, he has to have a re-think. Klopp will be perplexed, he’ll be wondering what is going wrong. And he can’t change the team around too much because when that front-three are firing they can beat anybody.

The defending Premier League champions are now seven points behind leaders City having played a game more, and Lawrenson thinks the title will be out of reach if they fail to beat Pep Guardiola's team at Anfield this weekend.