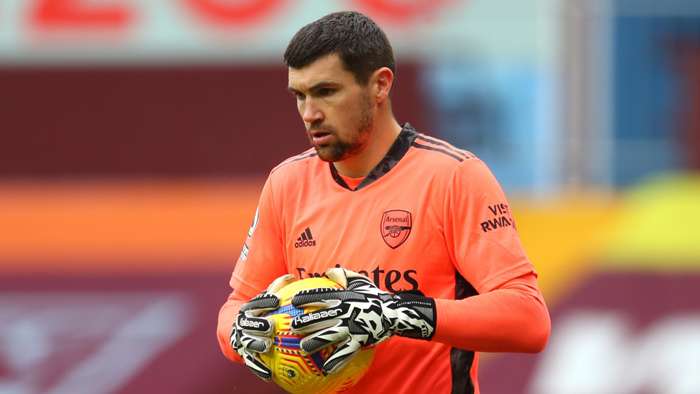 Mat Ryan admits to having experienced mixed emotions on his Arsenal debut, with the boyhood Gunners fan seeing his big day marred by a 1-0 defeat to Aston Villa.

The 28-year-old arrived in north London as back-up to Bernd Leno, but the German’s dismissal in a 2-1 reversal at Wolves opened the door to a starting berth.

Runar Runarsson stepped off the bench at Molineux, with Ryan nursing a hip complaint, but a Premier League bow was made at Villa Park.

Ollie Watkins grabbed the only goal of that game after 74 seconds, with his effort taking a sizeable deflection off Rob Holding and leaving Ryan to reflect on what could have been.

He told Arsenal’s official website: “Obviously with everything that's been going on with my circumstances, I just tried to adopt the mentality of focusing on myself and readying myself for the next opportunity, whenever or whether that may come.

“I think it was probably down to all that, that I was able to come in and have a performance like I did.

“Unfortunately I wasn't able to help us with the result. It was a deflection and I haven't watched it back yet, but there wasn't a lot I could do I don't think.

“It felt good to be out there though, I loved being out there. It still hasn't quite sunk in that it's my childhood club that I grew up supporting that I've just played for. But I'm sure it'll start to sink in a bit now that I've got a moment to reflect on it.

“I wanted the perfect start with the result but it wasn't meant to be.”

Ryan added on a rollercoaster ride that has seen him fulfil a lifelong dream: “I was just thinking that there's a greater power in life.

“Things happen for a reason, even the situation with Bernd. I probably could have pushed myself with some medication to be available for the Wolves game.

“If I'd have done that and the boss would have selected me, I'd have made my debut there. But when all that happened, in the 75th minute of the Wolves game my hip started to feel quite a lot better!

“That stuff can happen in football so it's just about trying to be ready and prepared.