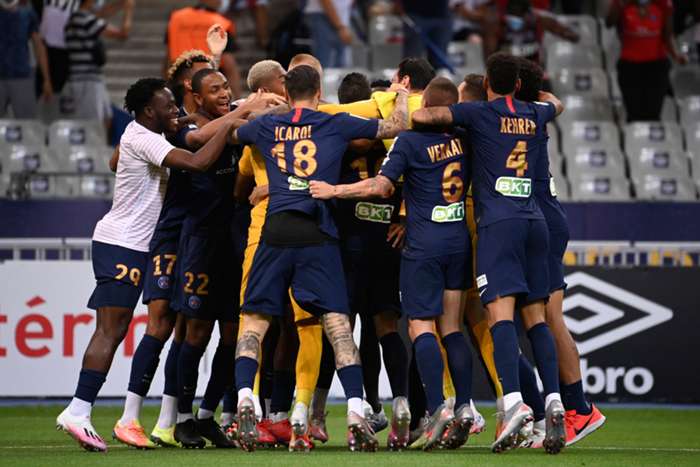 Pablo Sarabia said Paris Saint-Germain would grow in confidence for their upcoming Champions League mission after sealing another clean sweep of French football.

Having now secured a historic domestic quadruple, Sarabia says that PSG's French achievements will only bode well for their European push as PSG prepare for their return to the Champions League.

They face a difficult test when the Champions League does resume, though, as PSG will take on in-form Atalanta in their quarterfinal match.

Sarabia told Canal+ Sport: "It was an especially difficult game. But it's true that we won four titles this season. It was important to give a good impression and show good rhythm before the Champions League.

A trophy at the end of the night pic.twitter.com/WuIgbT3OnY

"This win will give us confidence. There's a great confidence in the team. Now we want to make sure we're physically ready for the game against Atalanta."

That clash with the free-scoring Italians is the Champions League quarter-final game that will take place in Lisbon on August 12.

Atalanta have scored 28 goals in 12 matches since the restart, remaining unblemished while securing 30 points during that time period to make their mark as one of Europe's most in-form teams.

Sarabia's midfield colleague Marco Verratti said PSG would deservedly celebrate on Friday before turning their focus to Atalanta, as the team remains far from full strength as a return to European football looms.

Verratti told France 2: "To play a 120-minute match, after a four-month hiatus ... we suffered.It's nice to win at the end."

He added, according to L'Equipe: "We're going to party and tomorrow we'll be thinking about another great match."

Asked about Marquinhos and Thiago Silva who went off with physical complaints, Verratti said both were "doing well".