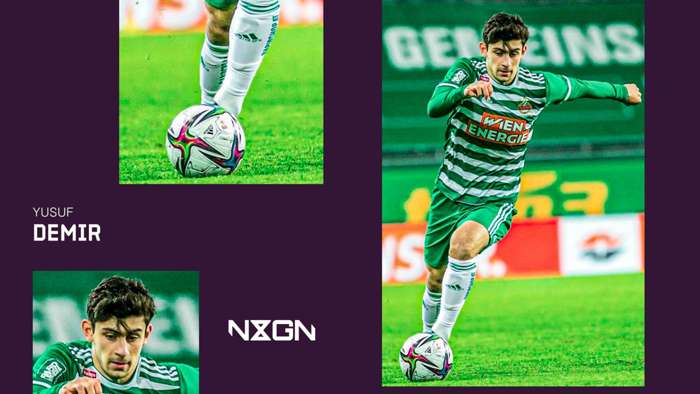 How do you replace a player like Lionel Messi?

Around the world, of course, there have been countless 'new Messis' who have popped up, though none have even come close to matching the achievements of the six-time Ballon d'Or winner.

And though that is unlikely to change, there is a Messi-esque youngster who could be about to be tasked with helping to fill the boots of one of, if not the greatest player of all time.

Rapid Vienna teenager Yusuf Demir has earned admiring glances from the Blaugrana after making an impressive transition into first-team football, though they are not the only interested party.

Manchester United, Real Madrid, Bayern Munich, Borussia Dortmund, Ajax and Red Bull Salzburg have all also been linked with his signature,with a big move now seemingly only a matter of months away.

A left-footed creative midfielder capable of playing in any attacking position and with superb dead-ball ability, it should come as no surprise that the 17-year-old is already being likened to the player he could one day replace.

"Yussi is very creative, dribbling well and has a great left foot," his agent, Emre Ozturk, toldSPOXin November."His technique and vision areoutstanding. The way he plays he is reminiscent of Messi.

"Yussi is a big Messi fan. He loves everything Messi does. He used to always play in his shirts."

Born in the Austrian capital, Demir began his footballing education with the city's oldest club, First Vienna, before joining the Rapid academy at the age of 10, though he was quickly integrated into the Under-13s squad

A revelation at youth level, he worked his way through the ranks before reaching the U16s, where he was taken under the wing of club legend and talent scout, Steffen Hofmann.

A graduate of the Bayern Munich academy at the turn of the century, Hofmann went onto make over 400 appearances for Rapid, playing predominantly as an attacking midfielder.

Given their similarities in terms of their favoured position, Hofmann was tasked with mentoring the shy teenager as he continued to develop.

"He has incredible potential," Hofmann toldLAOLA."It is a great pleasure to watch him play football.

"Inevery training session you can see from the first second what an extraordinary player he is. I have never seen a player like him at this age."

Demir was able to illustrate just how far ahead of his peers he was when in 2019, at the age of just 15, he was named the youngest-everPlayer of the Tournament at the prestigious U19 Mercedes-Benz Junior Cup in Germany, as Rapid finished as runners-up to Liverpool.

A year later in 2020 he won the same individual honour, though this timeRapidwere also crowned champions following a 4-0 win over RB Leipzig in the final.

That would prove to be one of the final times Demir would appear in youth football having already begun to make history in the senior ranks.

After being introduced off the bench for the final eight minutes of a routine Bundesliga win over Admira Wacker in December 2019, Demir became Rapid's youngest-ever player at the age of 16 years and 196 days.

Though a combination of a knee injury and the coronavirus meant he was forced to wait almost seven months for his second senior appearance, he wasted little time in showing he was ready to make the step up as he found the net against Sturm Graz.

From there he has become a regular in manager Dietmar Kuhbauer's matchday squad, and has so far racked up six goals and two assists in 25first-team outings.

His club form has already helpedhimearn three caps for Austria's U21s, having previously netted 19 goals in 22youth international appearances across the U15s and U17s.

Demir is also eligible to represent Turkey through his family's roots, though national coach Franco Foda is already said to be considering him for a call-up to the senior Austria squad.

Earning such honours would mark yet another high point in a career that many in his homeland hope will replicate that of the country's current poster boy, David Alaba.

"I have goals, such as winning as many titles as possible or even the Champions League," Demir toldTransfermarktin a rare interview."Personally, ever since I was a little kid, I have had the dream of one day winning the Ballon d'Or."

Quite which club will be next on his journey towards thatpotential honour remains up in the air.

With Demir's contract set to run out in the summer of 2022, it is understood that Rapid are keen to cash in this summer so as not to risk him leavingfor less than his worth, and he certainly has plenty of potential suitors.

"He wants to play for Barcelona someday, but we're not thinking about that when he takes his next step," Ozturk said.

"It is more likely to be Germany. We're already in contact with a few clubs. My phone rings every few days and a new potential team answers."

Whomever wins the race to sign Demir, they are getting their hands on a very exciting prospect.