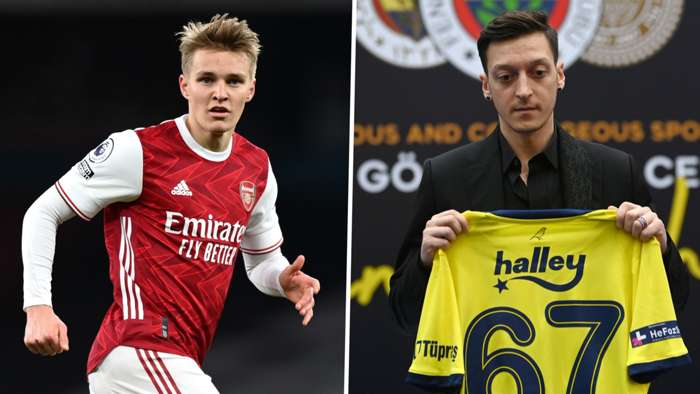 Arsenal’s plan at the start of the January transfer window was clear. Although they wanted to bring players in, the focus initially was purely on getting players out.

The problem was so severe that Mesut Ozil and Sokratis weren’t even registered as part of Arsenal’s 25-man Premier League squad, a decision which resulted in neither player getting a single minute of football for Arsenal this season.

Arteta himself admitted the situation was unsustainable and that’s why Arsenal were ready to leap into action as soon as the transfer window reopened on January 1.

“We have a large squad, we know that,” said the Gunners boss at the start of the window. “A lot of things that should have happened in the summer, we could not accomplish for different reasons.

“There are some players that are going to go on loan, they are going to leave, and that’s the priority at the moment because we can’t sustain the numbers that we have in certain positions.”

Despite Arsenal’s determination at that stage to reduce the squad size, few could have predicted just how successful they were going to be in achieving their aims during the next four and a bit weeks.

Even the most optimistic of Arsenal fans wouldn’t have said that by the end of the month, Ozil, Sokratis, Sead Kolasinac and Shkodran Mustafi would all have gone out the door.

But as Arteta takes his side to face Wolves on Tuesday night in the Premier League, that’s what’s happened - with Mustafi’s move to Schalke on the final day of the transfer window completing an impressive month’s work from Arsenal.

Just like with Ozil, who has now joined Fenerbahce, and Sokratis, who has moved to Olympiakos, Mustafi had his contract terminated early by the Gunners to allow him to return to Germany.

All three players were expected to see out their deals in north London before leaving on a free transfer at the end of the season, but they all agreed to end their stay early after talks with technical director Edu.

How much it cost Arsenal to terminate their deals remains unclear, but there is no doubt the club will have saved some money having reached an agreement with the high earning trio to get them out the door now, rather than allowing them to see out the remainder of their deals before leaving in the summer.

For Arteta, the departures of Ozil, Sokratis and Mustafi solve a major problem and he is leftwith a squad that is starting to really feel like his own.

And for Edu, the January transfer window can be viewed as a big success.

There have been question marks over the Brazilian since he took over the role of technical director in July 2019, with many wondering whether he had the experience to take on such a big job in the Premier League.

But he has shown a ruthless side during the January window that Arsenal have perhaps been lacking in recent years.

“It’s something that has been needed,” Arsenal legend Lauren told Goal, when quizzed on the work his former team-mate had done at the Emirates Stadium during the past month.

“It’s the best choice for the players that they’ve been moved on and for the club it’s the best way because you avoid paying those huge wages.

“It’s a win and win situation. The club wins and the players can go and play week in, week out, without being on the bench or without even being in the squad.

“So Edu has been doing a fantastic job. It’s about understanding what the club needs in order to keep progressing.”

Lauren added: “I believe in Edu, I know he has been working very hard since he stepped into the club. I believe he is going to do a great job.

The relationship between Arteta and Edu is one that Arsenal hopewill soon get the club back competing at the top of the Premier League.

Sources at the club routinely say that the pair understand each other well and have formed a close bond, with both determined to follow a blueprint for success that has been clearly mapped out since Arteta’s appointment as Unai Emery’s replacement in December 2019.

“Probably, in the last year or so I spoke to Edu more than anybody else in my life,” Arteta said on Monday.

“That’s what my wife says, with all the things we’ve had to go through with the coronavirus as well as the transfers.

“We have a great relationship and a great understanding. We support each other in a great way.

“It’s lucky at least that if you have to talk with someone many times throughout the day, that the relationship is strong.”

Last summer’s window was a difficult one to navigate for Arsenal due to the coronavirus pandemic, but they still ended it having secured their two top targets in Thomas Partey and Gabriel Magalhaes. They also tied down Pierre-Emerick Aubameyang and Bukayo Saka to new deals.

The decision to sign Willian on a free transfer and hand him a three-year contractlooks a costly mistake by Edu and Arteta, but on the whole the business done in the summer was viewed as a success. That has been followed up byan impressive winter window.

Ozil, Sokratis, Mustafi and Kolasinac were all taken off the wage bill, Willian Saliba was sent out on loan to Nice while Ainsley Maitland-Niles and Joe Willock were loaned to West Brom and Newcastle respectively.

Martin Odegaard arrived on loan from Real Madrid to add some creativity to the attack and Mat Ryan was brought in from Brighton to provide some experienced cover for goalkeeper Bernd Leno.

Arsenal now head into the second half of the season with their squad in much better shape thanks to the work that has been done. It's also a squad that feels a lot more like Arteta's, with a large number of the issues he inherited now dealt with.

Edu and Arteta started the transfer window with a clear plan and ithas been put into action in impressive and ruthless fashion.