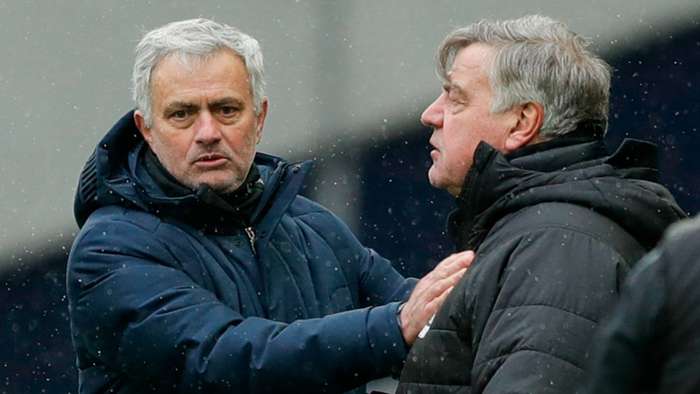 Jose Mourinho has improved his dominant record against Sam Allardyce's teams after Tottenham made light work of West Brom on Sunday afternoon.

Spurs were boosted by the surprise return of Harry Kane, who was named in the starting XI after recovering from an ankle injury, and he opened the scoring with a well-taken effort after being played through on goal by Pierre-Emile Hojbjerg the 54th minute.

Son Heung-min rounded off a comfortable 2-0 victory with a trademark finish of his own four minutes later, with West Brom left rueing their mistakes in suffering their 15th defeat of the season.

Former Everton, Crystal Palace and West Ham boss Allardyce has now faced Mourinho more often without recording a victorythan any other manager in the Premier League, having lost 10 and drawn three of his 13 fixtures against the Portuguese coach.

David Moyes is the only manager who Mourinho has faced in the same number of Premier League games without suffering a defeat, with Allardyce'scounter-attacking style of play ultimately proving ineffective in his latest duel with the Tottenham boss.

Mourinho also saw his team beat the Baggies at the Hawthorns in the first half of the season, as Kane once again got himself on the scoresheet with a dramatic last-minute winner.

Allardyce is now in grave danger of being relegated for the first time in his managerial career, with West Brom having lost seven and drawn one of their last eight matches.

The Baggies have conceded 28 goals in 10 top-flight games under the Englishman, which is the joint-worst record of any manager in the competition's history after the same number of matches alongsideDanny Wilson at Barnsley (1997), Nigel Adkins at Southampton (2012) and Slavisa Jokanovic at Fulham (2018).

Tottenham, meanwhile, have only tasted defeat once intheir last 27 home games against promoted clubs, with their last loss comingagainst Wolves in December 2018.

Spurs are up to seventh after their latest triumph, four points behind fourth-placed Liverpool in the race for Champions League qualification.

Tottenham will now look ahead to an FA Cup fifth-round meeting with Everton on Wednesday, while the Baggies are due back in Premier League action at home to Manchester United on February 14.

Zidane was right: Bale's best days have long since passed