Arsenal, Barcelona and the winners and losers of the January transfer window
Match

Arsenal, Barcelona and the winners and losers of the January transfer window 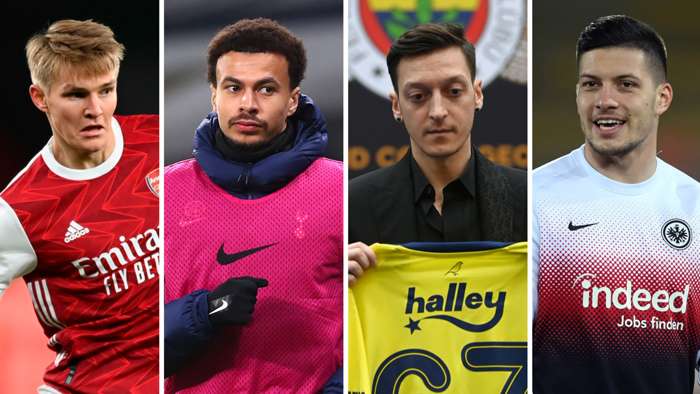 Another January transfer window has come and gone, and though blockbuster moves were few and far between, there werestill plenty of intriguing deals to pique the interest of supporters around the world.

Both on and off the pitch, things are looking a lot rosier at Arsenal now than they did just over a month ago.

Mikel Arteta has overseen a huge turnaround in form over the past six weeks, with the Gunners having gone from being in a potential relegation battle to back in the race for a top-four finish following a seven-match unbeaten league run.

Off the field, meanwhile, the north London outfit will be thrilled with the business they have been able to do over the past few weeks.

The major narrativeheading into the January window surroundedthe future of Mesut Ozil, and though Arsenal received no fee for the former Germany international, his departure forFenerbahce at least brought the curtain down on a rather distracting sideshow at the Emirates Stadium.

A similar contract resolution allowed Ozil's fellow outcast, Sokratis Papastathopoulos, to sign forOlympiacos whileShkodran Mustafi's deadline-day move to Schalke saw him join Sead Kolasinac in Gelsenkirchen and ensured that four players who were clearly surplus to requirements under Arteta have now been moved on.

Loan moves for William Saliba (Nice), Joe Willock (Newcastle) and Ainsley Maitland-Niles (West Brom)have further helped trim the Spaniard's previously bloated squad, with all three likely to enjoy increased game time over the second half of the campaign at their new temporary homes.

All those outgoings offered Arteta the opportunity to plug some of the holes in his squad, most notably bringing in Martin Odegaard on loan from Real Madrid.

The Norway international produced some stunning displays for Real Sociedad last term, and if he can reach those same heights at Arsenal then the creativity issues that the club struggled with duringthe first half of the season will likely be a thing of the past.

Brighton goalkeeper Mat Ryan was also brought in to act as a proven deputy for Bernd Leno.

If Arsenal have 'won' the transfer window from a Premier League perspective, then across north London things could hardly be much more different.

Tottenham were unable to bring in any new faces over the course of the window despite their run of just two wins in nine league games seeingthem slip out of title contention.

And though that will likely have left Jose Mourinho rather frustrated, the Portuguese is unlikely to be the most upset Spurs employee right now given how the window has played out.

That honour can be bestowed on Dele Alli, who has found himself out in the cold under Mourinho this season having made just six starts in all competitions.

The transfer window promised him a potential route away from the club, and with Mauricio Pochettino having taken over as manager at Paris Saint-Germain it came as no surprise to see Alli being linked with a move to Parc des Princes.

As reported byGoal, the England international was keen to reunite with Pochettino in the French capital, but Spurs blocked any move as they failed to bring in a replacement of their own.

Quite why they require a replacement for a player who sometimes does not even make the matchday squad is anyone's guess, but the decision means Alli is likely set for another six months spent largely on the sidelines.

The aforementioned Odegaard was not the only Real Madrid fringe player to earn himself a loan move away from Santiago Bernabeu in January, with Luka Jovic having also temporarily departed the Spanish capital.

The Serbia international has managed just two goals in 32 appearances for the Blancos since his€70 million (£62m/$79m) arrival from Eintracht Frankfurt in June 2019, making him one of Europe's most expensive flops of recent transfer windows.

At 23, Jovic still has time on his side, and it was clear that taking some time away from Madrid could be beneficial for his career as he looks to prove himself at the highest level.

Frankfurt were only too happy to re-sign a player who scored 27 goals for them during the 2018-19 campaign, and Jovic has picked up where he left off in the Bundesliga.

His first four appearances back in a Frankfurt shirt have returned three goals, with the striker already looking reborn now that he is back in familiar surroundings.

It remains to be seen whether he will ever live up to his price tag in Madrid, but certainly this window has been kind to Jovic and Frankfurt.

While Madrid were limited to the odd loan departure over the course of the January window, things were even quieter from a transfer point of view at Barcelona.

Despite some improved performances on the pitch, the Blaugrana remain in a state of crisis, with their crippling financial situation and the future of Lionel Messi casting a shadow over March's presidential elections.

Despite entering the final six months of his contract, Messi was never likely to leave Barca in January, but the club's failure to yet again move on some of their other high earners means that keeping the Argentina star past thissummer may not be financially viable - even if he does want to stay.

In terms of incomings, there was hope that a deal could be struck to sign Eric Garcia in January in a bid to help cover for the injuries Ronald Koeman's side have suffered at centre-back.

A fee of around€3m (£2.7m/$3.6m) had reportedly been agreed, with Garcia even willing to forego his salary to rejoin his boyhood club as he bids to catch the eye of Spain manager Luis Enrique ahead of this summer's European Championship.

Instead, the 20-year-old will have to wait until the summer to complete his return to Camp Nou on a free transfer, as Barca head into the second half of the season without any new faces or hope that they will be able to retain the club's greatest-ever player at the end of the campaign.

As far as making value-for-money signings, few clubs anywhere in Europe can claim to have had a more impressive window than Bayer Leverkusen.

Gray's arrival is particularly intriguing, with the former Premier League winner still only 24 and undoubtedly has the potential to trouble any opposition defence when at his best.

The ex-Birmingham City trainee would not be the first English winger to thrive in the German top flight in recent times if he does succeed at the BayArena.And although he faces competition for a starting berth, he certainly has the talent to revive his career away from the King Power Stadium.

While there has been the odd headline-grabbing move over the course of the past month, in truth it has been a window that failed to live up to expectations.

January is traditionally a difficult time to pull off blockbuster deals, but as the footballing world continues to get to grips with the financial realities of playing through a pandemic, this time there has been even fewer high-profile transfers than normal.

Fractionally over £220m ($274m) is all that has been spent on deals involving clubs from Europe's 'Big Five' leagues - an amount that Chelsea spent on their own during the summer window.

That outlay is down from over £810m ($1.1bn) that was spent last January, while three of the five most expensive transfers wereagreed upon before the window even opened on January 1.

Such a quiet January may open the summer up to be one of the most gripping of recent times, with the futures of Messi, Kylian Mbappe, Paul Pogba and Erling Haaland - to name a few - likely to be up in the air come the start of June.