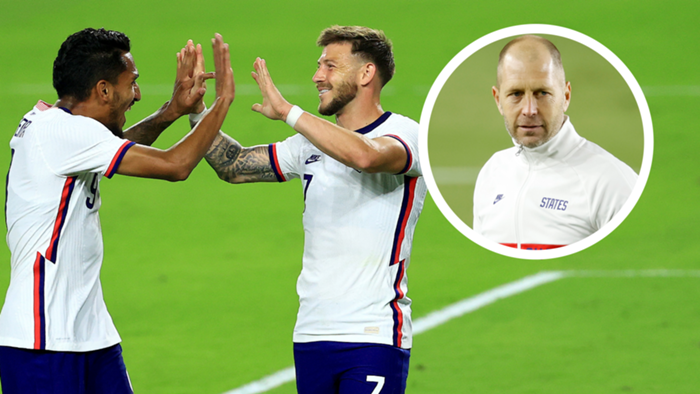 There are some coaches that value the gritty, 'grind-em-out' victories just as much as the perfectly-executed blowouts.

At least on this day, Gregg Berhalter was not one of those coaches.

"I always want to see the 7-0 wins,"Berhalter said after his team's emphatic win over Trinidad & Tobago on Sunday as the U.S. began 2021 in the most emphatic fashion possible

It was a virtually-faultless performance from the combined senior and Under-23s squad, one which saw pretty much every player on the field give a good account of themselves.

The game provided was a showcase for several talented young U.S. stars such asJesus Ferreira, Sam Vines Jonathan Lewis and Miles Robinson, all players that will most certainly play vital roles in the Olympic qualifiers to come.

But there isalso some perspective that needs to be addressed.

This Trinidad & Tobago team had not played together in over a year and their domestic league, where several players on this roster currently play, has been suspended due to Covid-19. This was not a vintage T&T team, nor anywhere near the one the U.S. could come up against in World Cup qualifiers.

For Berhalter,that does notmatter. What does matter, though, is his own team's performance, and they put on a hell of a show on Sunday night.

"To me,it's about how you play against your opponent, and you have to still perform and that's what's most important," he said. "To me, it's about how we are creating goalscoring opportunities, how we arefinishing goalscoring opportunities, how are we defending, how we pressing the ball and all those things need to be there, regardless of who we're playing.

"I think for us as a group,we prepared really hard for sure. And when we worked with the guys for the last three weeks, we went in-depth about how we thought they were gonna play. It was an unknown group for us, so we had to come out and perform and the guys did that. That's all we can ask."

Perform they did, with none better than Ferreira.

The FC Dallas forward had a hand in five of the seven goals, scoring two while assisting threemore. It was a dynamite performance from the 20-year-old, who was the clear Man of the Match ina game where every U.S. player did something well.

Sunday could serve as a launching pad for Ferreira, who was making only his second USMNT appearance. His first came a year ago in January camp against Costa Rica, but his momentum was slowed after a difficult one-goal season in MLS.

That momentum thankfully seems to beback, which is great news for the U.S. as Ferreira prepares to potentially lead the line in the upcomingOlympic qualifiers.

"We know that a lot of young guys were in this camp, alot of players that might be in the Olympic qualifiers, andit was great to get those three weeks of training toget to know each other and to understand our movements," Ferreira said. "Being able to perform like this today after three weeks of hard training, it's an amazing feeling."

Berhalter added: "Ever since we started working with him last January, we had a really good feel for him and a really good impression and an idea of what he can do in our system.We can't control what happensat the club level, and for us, it's still having faith in a player, believing in a player and we're excited to get him back into camp this January.

"We tried to call him in just in December, but Dallas was still playing so we couldn't do that, but he gives us a lot of options, a lot of flexibility and we really like how he performs for us at the forward position."

Ferreira was far from the only star to shine, though.

Lewis, often earmarked as a super-sub for both club and country, flourished in a starting role, scoring the USMNT's first goal.

Paul Arriola, a USMNT regular fresh off an ACL injury, fired two goals and assisted another as links to Swansea City persist.

And Robinson, the 23-year-old Atlanta United defender that already has an MLS Best XI selection under his belt, was faultless in defense while getting a goal of his own from a diving header.

Aaron Long, meanwhile, capped offa week that saw him linked to Liverpool with a commanding performance, and the list of strong showings can go on and on.

The USMNT has fired 19 goals and conceded just two over their last three games, all against CONCACAF competition. It isa good sign ahead of World Cup qualifiers, Olympic qualifiers, the Nations League and the Gold Cup, as there will be plenty of CONCACAF on the menu for both the senior and U23 teams in the next few months.