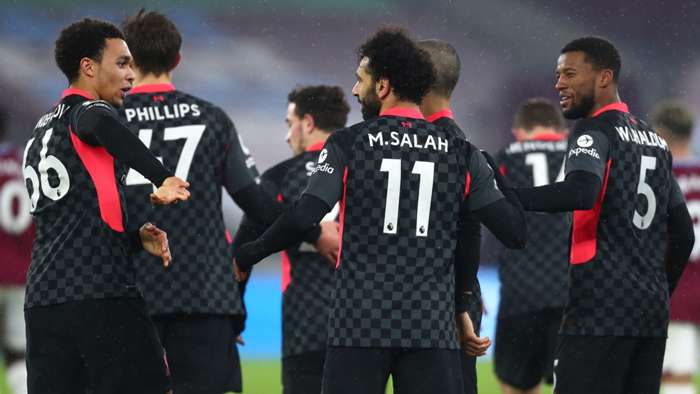 Six touches. That was all it took to confirm our suspicions.

It’s been a profitable week in the capital for the Premier League champions. If Thursday’s win over Tottenham was a statement, then they backed it up on Sunday with what was, in many ways, an even more impressive victory, 3-1 away to West Ham.

Their triumph at the London Stadium, achieved courtesy of sublime second-half strikes from Mo Salah (twice) and Gini Wijnaldum, lifts the Reds back up to third in the table, four points behind leaders Manchester City, who visit Anfield next Sunday.

Game on. Title race on.

After a lean spell over Christmas, and despite an injury list which shows little sign of easing, Liverpool have suddenly sprung back to life as January has come to a close. Strangers for a month, they have found their mojo once more.

And if we ever needed evidence, then their second goal here said it all.

This was Liverpool. From back to front, in the blink of an eye. From defending a corner to wrapping up the points, and all in the space of six touches and 14 seconds.

It was some goal. First Andy Robertson got his head to an Aaron Cresswell corner, sending the ball out of the danger zone. It was collected by Trent Alexander-Arnold, who took a couple of touches before spearing a trademark diagonal out to the left flank for the galloping Xherdan Shaqiri.

Shaqiri had time and space to carry the ball, but opted instead for a first-time pass, over the last defender and into the path of Salah. The Egyptian’s first touch was exquisite, his second clinical. Liverpool led 2-0, and the points were in the bag.

It was Salah’s 21st goal of the season, and his second of the afternoon. He had given Liverpool the lead 11 minutes before that counterattacking masterpiece, collecting a pass from substitute Curtis Jones, cutting inside Cresswell and curling a peach of a strike into Lukasz Fabianski’s top right-hand corner.

The Reds’ third goal was another thing of beauty, West Ham passed to death before two more substitutes, Roberto Firmino and Alex Oxlade-Chamberlain, quickened the tempo with a give-and-go on the edge of the box. Firmino, whose form has picked up dramatically in the past seven days, had the presence of mind to pull the back for Wijnaldum, who swept home for 3-0.

Craig Dawson’s goal, put away from a corner from the right, denied Klopp’s side a clean sheet, but they can be happy with the way they handled the Hammers’ threat here. Nat Phillips, making only his fourth Premier League start, was excellent against Michail Antonio, while Jordan Henderson was superb alongside him. Where would the Reds be without their captain and his relentless standards?

Reinforcements look to be on the way, in any case. A move for Ben Davies, the Preston centre-back, should progress before Monday’s transfer deadline. Not the most glamorous of signings, but one Klopp feels is needed, given the club’s ongoing injury crisis.