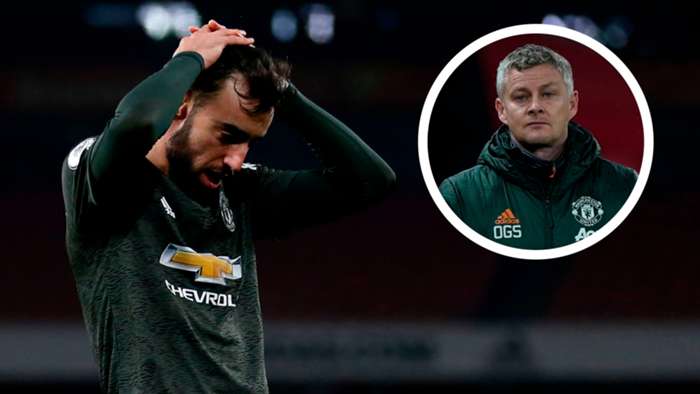 Bruno Fernandes’ reaction at the full-time whistle at the Emirates Stadium on Saturday night said everything you need to know about him as a player and awinner.

Firstly, there will have been frustrationwith himself for failing to make the difference and secondly, he was clearly annoyed aboutManchester United’s failure to get the three points against Arsenal which were there for the taking.

Fernandes had only been at the club a matter of weeks when he made his opinions on draws very clear to his team-mates in the dressing room at Goodison Park. That mindset has not changed so his disappointment following the stalemate in north London should come as no surprise.

The fact that he wasn'tshortlisted for the club’s January player of the month award prompted a head scramble emoji from their social media accounts.And that's not because he deserved to be there but rather thathe had dominatedthe awards since his arrival a year ago.

For 12 months now, United have been used to Fernandes being the hero. He would always be there with a goal, an assist, a key pass or a game-changing contribution. Worryingly, he is now without a goal in his last five league games - his longest dry spell since signing -and Unitedhave won just two of those.

While his form may have faltered his effort certainlyhasn't. He remains one of the last to leave the training pitches on a daily basis and his determination cannot be doubted.Ole GunnarSolskjaer, meanwhile, has refuted suggestions that United rely on the playmaker’s genius too much.

“Bruno has come in and helped the team, no doubt about that,” he said. “Bruno came in at a time when we needed that type of player and he came into a team that makes his attributes and skills come to fruition.

“He’s part of a chain here and I’m sure that Bruno will say that he also appreciates his team-mates and that they help him through games.”

The statistics, meanwhile, show just how vital Bruno has been. He has featured in 35 league games in 12 months -scoring 19 goals and providing 14 assists - and has earned four player of the month awards.He propelled United into the Champions League last season and pushed them all the way to the summit this year.

But it has been a disappointing couple of weeks for the 26-year-old.

They’ve been lacking his individual moments of magic and somehow need to find that spark to get past teams and pick up the points they have dropped in their last three league games.

Solskjaer's side are in danger of losing themomentum they worked so hard to build up earlier in the seasonfollowing recent draws against Liverpool and Arsenal, as well asdefeat toSheffield United.

That was their only loss since the start of November but, with ManchesterCity now firing on all cylinders, draws aren’t going to be enough to keep United at the top.

They must win both of their games this week starting with Southampton at home on Tuesday and if Fernandes does have another off day, they must find a way to do it without his expertise.